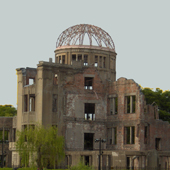 There’s a God for That

Optimism in the Face of Earthquakes, Tsunamis and Meltdowns

From Hiroshima to Fukushima

Someone more qualified than I could better explain the historical developments that link the Hiroshima of 1945 to the Fukushima of 2011, but let me at least sketch an outline.

In the years immediately after Hiroshima, the US kept its secret weapon to itself. But the USSR, wary of allowing the United States to wield unbalanced power, developed its own nuclear weapons program, successfully testing its first bomb in 1949. World War II was supplanted by the Cold War.

In 1953, with the blocs lined up along the Eastern European frontier, the NATO allies worried over being on the world’s front lines once again. President Eisenhower, in a bid to calm nerves, spoke to the UN General Assembly with a “determination to help solve the fearful atomic dilemma.” In his “Atoms for Peace” speech, he proclaimed that “the inventiveness of man shall not be dedicated to his death, but consecrated to his life.” (We must always be on guard when generals talk of death and life.)

The Atoms for Peace program opened the nuclear treasure chest. The next year, the chairman of the United States Atomic Energy Commission predicted that electricity in the future would be “too cheap to meter.” That same year, 1954, the USSR connected the world’s first nuclear power plant to the electric grid; three years later the US followed suit. And today we have a go-go-go mentality that allows neon signs to burn all night long, selling corporate slogans to a sleeping world.